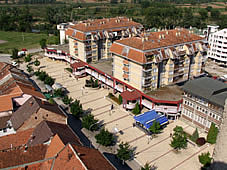 Trstenik is an econimic, cultural and administrative center of the municipality having approximately 49.043 inhabitants, 51 settlements covering the area of 448 km2. The town itself has approximately 18.000 inhabitants.
Trstenik is situated in the central part of Serbia, 21° east of Greenwich, 43,5° north latitude, approximately 200 km south of Belgrade, 171 m above the sea level. The Zapadna Morava river flows through the tolon, with its fertile valley where in largest part of the settlements and municipality developed.

Trstenik has a very favorable geographic position regarding transportation and communication. Being located by the Pojate-Kraljevo main road and connected to all parts of Serbia and Montenegro by roads and railroad lines.
In the vicinity of Trstenik, i.e. 10 km from it, there is Vrnjacka Banja, the center of continental tourism in Serbia.

Trstenik is also accessible by means of air transportation and touristic-sports Trstenik airport.
The municipality of Trstenik lays in the colourful valley of the Zapadna Morava river and on the hilly slopes of Gledicke Mountains and woody Goc Mount.
Hilly relief, moderate continental climate, the winding course of the Zapadna Morava river with many of its meanders and islands, mineral springs, rapid mountain rivers, forest regoins interweaving with vineyards and plowed fields, diversity of flora and fauna, all create a very interesting countryside.
Numerous cultural and historical monuments of the prehistoric and antique up to the present times, add to this natural surroundings.

Trstenik and the surroudings have been on the border of empires and strategically important communication lines for centuries, which left considerable trace and influence in culture. Localities such as Blagotin and Stragari date back to the classical period, having significance that far exceeds the borders of our country. The Roman influence can be noticed in the localities of Strazba, not far from Trstenik, Bucje village, Donji Dubic and Veluce. Largest Roman contribution to the region was bringing vine and making viticulture one of the most important activities here. Dating back to medieval times there are the fortification called Jerina's town, the Church of  Sveta Petka, the site of former church Djurovaca, the small church Trebnica. This period is marked by the best examples of the Morava school of architecture  Ljubostinja and Veluce Monasteries.

Ljubostinja Monastery was didicated to the Assumption of the Holly Mother of God. It is located 4 km north of Trstenik, near the Ljubostinjska river, at the foot of the Gledicke Mountains. The monastery was built by the end of the 14th and the beginning of the 15th centuries, being the endowment of Duchess Milica, who according to the legend, met Duke Lazar here for the first time. For centuries, it has been the cultural center of the region. Jefimija's ''Ode to Duke Lazar'' was created in the Monastery same as ''Radoslavljevo jevandjelje'' (the ''Gospel of Radoslav'') which is now kept in St. Petersburg. Inside the church, there are tombs of Duchess Milica and Nun Jefimija-the first Serbian attracts thousands of visitors every year. Many of them often come back. 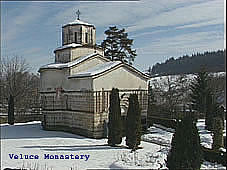 Veluce Monastery was dedicated to the Entrance of the Holly Mother of God. It is located in Veluce village, 7 km south of the main road Pojate-Kraljevo. Hilly ground and the Srebrenica river in the vicinity of the monastery, make the surrondings perfect. According to the fresco depicting its endower, the monastery is the endowment of a feudal family, built by the end of the 14th century. After Drenca, it is the oldest monastery pertaining to the Morava school of architecture. Veluce Monastery is, same as Ljubostinja, considered to be a cultural monument of high importance to the state. The old nightstay auxiliary building attracts attention in the churchyard, and it was built during the reign of Duke Milos Obrenovic. The way churchyard is well-arranged, owing to the effort of sisterhood, it resembles a botanical garden.
In the vicinity of the monastery, there is a spring of mineral water known as ''Mivela''. Owing to its healing features for the large content of magnesium, it meets the most strict world standards, therefore it was declared as one of the best worldwide at the World Exibition in New York. 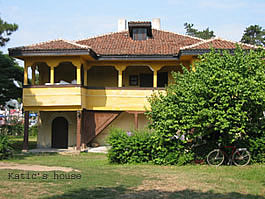 The town itself has a number of very attractive buildings that have witnessed the past of Trstenik. The heart of the old town is in the close center. Most of the old buildings date back to the second half of the 19th and the beginning of the 20th centuries. The oldest preserved buildings is the house of a respectable tradesman and minister, Petar Katic, built in the second half of the 19th century. It is considered to be one of themost beautiful houses of Moravska Serbia, protected by the Low of cultural monument protection of the Republic of Serbia. Another representative building that used to be the elementary school ''Sveti Sava'' was built in 1873. Further on, the Municipality building was built in 1935. Together with the Church of the Holy Trinity, they dominate the town square. The Church of the Holy Trinity was built in 1900 and it is dedicated to the Descend of the Holy Spirit, pertains to the new direction of the Morava school and is very similar to the Church of King Milutin in Hilandar.

The culture of Trstenik and its surroundings has a longlasting and rich tradition. Today, the cultural life in Trstenik is organized by a number of institutions: the People's University , the Cultural and Educational Association, the National Library ''Jefimija'', the Museum, the Cinema, the Amateur Theatre, as well as numerous artistic societies. Generous support is given by the church municipality and RTV Trstenik.
Trstenik is a host to several significant culturall events:Jefimija's days, Contemporary Serbian Prose and Piano duets competition.
The rich and diverse etnographic heritage of the Trstenik municipality is cherished by a large number of cultural and artistic societes from Trstenik, Stopanja, Medvedja, Velika Drenova, Poljna, Riljac, etc., that have successfully represented the municipality throughout Europe. The permanent etnographic exibit is displayed in the Trstenik Museum. 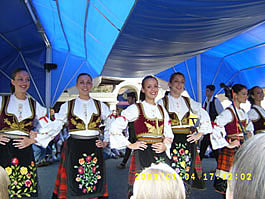 The most important sports facility in Trstenik is certainly the touristic-sports airport that is taken care of by the aerial-spots club Trstenik. Organizing of touristic flights with the panoramic sightseeing is particularly interesting.
There are other sports facilities such as the Sports Hall, the out-door pools, football, tenis and other courses. They are located in the attractive surroundings by the very bank of the Zapadna Morava river, i.e. in the vicinity of the town beach.
The banks of the Zapadna Morava river with its well-arranged beaches and shady branches provide a great opportunity for spots fishing. There are many fishing competitions being held there.
''Trstenik on the Morava river'' is a sports-entertaining event that tends to spread within international range. It last for two days and includes competitions of pioneers and seniors in fishing, a swimming marathon, the cooking of the fish soup known as ''kotlic'' (a pot), and the unique boat race.

Villages of the Trstenik municipality, situated on woody slopes of Goc Mount and Gledicke Mountains represent the great potential for rural tourism. Townsmen of Brezovica village (500m) have been developing rural tourism successfully since 1991.
Shady regions of decidious forests, pure mountain rivers, wide meadowds full of medical herbs and ecologically healthy environment create the perfect surroundings.
In the end, what adds to all this, is the tr aditional hospitalty of the local population, the opportunity to relax and enjoy nature, collect medical herbs, mushrooms, wild fruit, help in country works and, of course, enjoy the local specialities of food and drinks.